Trim the Fat When Dining Out 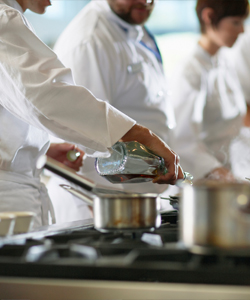 Restaurant meals are notoriously high in fat, refined carbohydrates, and calories, and the portion sizes are outrageously large.So, with the average American eating out four to five times per week, it has become increasingly important to be mindful of what you order. Many restaurants post nutritional information on their menus or websites, giving you a new way to plan ahead and eat well. Well, at least that’s the thinking. However, recently the accuracy of restaurants’ stated nutritional information has been called into question. In a study published in the Journal of the American Medical Association, 269 foods from 42 restaurants in the Massachusetts, Arkansas, and Indiana areas were sampled to assess the accuracy of the stated energy (calorie) content listed on nutritional information from the restaurants. Of the foods sampled, just 7 percent were within 10 calories of the stated number. The study included quick-serve and sit-down restaurants. There was a higher variability in stated calories from sit-down restaurants than in quick-serve. Of the 269 foods sampled, 19 percent were 100 calories more than the stated number and of those foods, the top 10 percent were 289 calories more than the stated numbers. Eating an extra 100 calories per day over the course of a year could help you pack on more than 10 pounds. If you have an extra 300 calories per day, it’s triple that. It can be frustrating to think you have made a smart choice at a restaurant and planned your day around that meal only to find out that you accounted for an incorrect number. The study breaks down food into categories. Carbohydrate rich food and desserts had significantly more calories than stated compared to other food categories. Carbohydrate-rich items averaged 81 calories more than the stated number and desserts had an average of 38 calories more. Salads had an average of 27 calories more than stated and meat dishes actually had an average of 50 calories less than reported. The take home message is that you may want to account for a few more calories when you dine out. Other strategies to help you cut calories when dining out include: While all of these strategies can help you eat better at a restaurant, planning is the best thing you can do to stay on track with your weight loss and maintenance goals. So enjoy your social gatherings and restaurant time. Just remember to use all the tools for success at your disposal. This information is for educational purposes only. It is not intended to be an exhaustive examination of the subject matter nor a substitute for medical advice. Always consult your primary care physician or healthcare provider before beginning any diet or exercise program.